According to the American Heart Association (AHA), some factors contributing to SCA include: 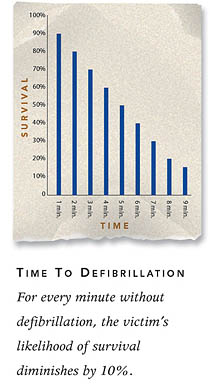 Death from SCA is sudden and unexpected, occurring instantly or shortly after the onset of symptoms. While there are many contributing factors, SCA can strike people anytime, anywhere, and at any age. Even a seemingly healthy person can suffer a cardiac arrest without warning. According to the American Heart Association, as many as 50% of SCA victims have no prior indication of heart disease - their first symptom is cardiac arrest. For those with a known history of heart attacks, the chance of sudden cardiac death is 4-6 times greater than that of the general population.