What is Sudden Cardiac Arrest

Sudden cardiac arrest, commonly known as massive heart attack, kills more than 450,000 Americans each year, making it the #1 health care problem and leading cause of death in the United States and #2 killer in Asia. This is equivalent to the entire population of the cities of Sacramento, Kansas City, or Atlanta being wiped out in one year, or nearly one death every minute. Breast cancer, stroke, and AIDS claim fewer lives combined. Hong Kong is no better off, sudden cardiac arrest takes the lives of over 10,000 people each year, a similar incident per population rate to the United States, and the numbers keep growing year over year.


In SCA, the heart suddenly stops beating normally. The electrical impulses that control the rhythm of the heart become so disorganized that the heart begins to quiver and can no longer effectively pump oxygenated blood to the brain and the body's vital organs, and death occurs within minutes. CPR cannot reverse ventricular fibrillation (VF), the chaotic cardiac rhythm most often seen in SCA victims; prompt external defibrillation is the only known effective treatment to halt sudden cardiac arrest. 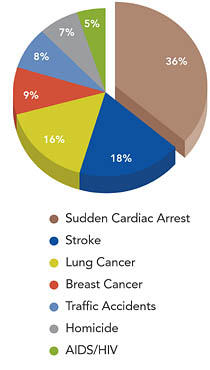